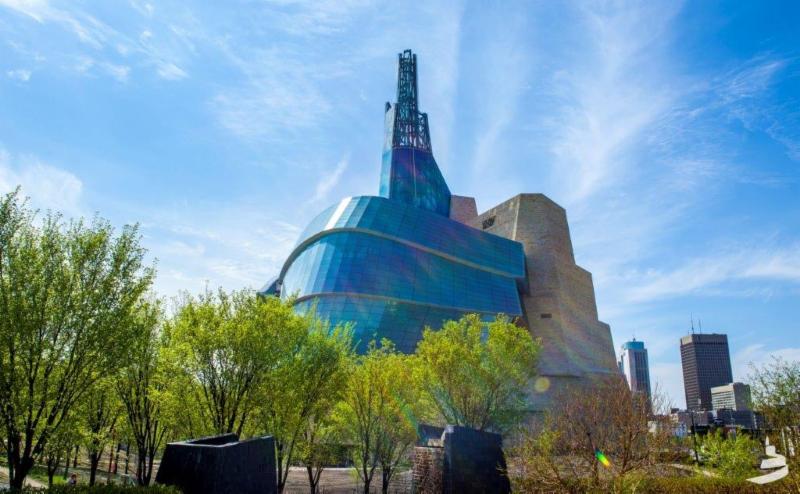 Winnipeg – May 16, 2019 – The Canadian Museum for Human Rights (CMHR) is set to spring into the tourism high season this weekend with expanded hours, diverse programs and a new two-day ticket for summer visitors.

“Many out-of-town visitors have told us that one day is not enough time to explore everything they want to see in the Museum,” said Jacques Lavergne, CMHR Vice-President of Visitor Experience and Engagement. “A two-day ticket will allow them to journey through the galleries at their leisure, with time for rest breaks, lunch and browsing in the Boutique.” Starting this Saturday (May 18), the two-day tickets will be available for $30 (adult rate) for consecutive days only. A single-day ticket is currently $21. Visitors who initially buy a single-day ticket can upgrade to a two-day ticket at any time during their visit, for use the following day. The Museum will now be open seven days a week – including Victoria Day and other holidays – until after Labour Day. Hours are 10 a.m. to 5 p.m. except Wednesdays, when visitors are welcome until 9 p.m. – with free admission on the first Wednesday evening of each month (5 p.m. to 9 p.m.). On all other Wednesdays, admission is offered at the reduced rate of $5 after 5 p.m. Fascinating programs and exhibitions are planned throughout the spring and summer, including:

Rights of Passage: Canada at 150 invites visitors to peer through the lens of four different eras since 1867 to learn how people were thinking about human rights at the time. Projected wampum beads dance to the sound of your voice, shifting into designs created by art students at Winnipeg’s Children of the Earth High School. A dress made from wearable technology (fibre optic fabric, laser wire and LED lights) changes colours when you step on a hashtag. A Victorian-era “magic lantern” projects images of early human rights struggles.

Visitors can also tune in to war-time broadcasts on a period radio set, switch channels on 1970s vintage TV screens, or watch Instagram posts appear above shifting holograms. Indigenous oral traditions are also showcased as an enduring source of knowledge.

The last of four special exhibitions presented for Canada 150, Rights of Passage opens to the public at 10 a.m. on International Human Rights Day (Sunday, December 10), with free admission to the Museum all day.

An official opening event begins at 2 p.m. in Bonnie & John Buhler Hall, including drumming by Inuit Elder David Serkoak – who contributed to the exhibition as a survivor of the 1950s forced relocations of the Ahiarmiut people in the Far North (Farley Mowat’s “People of the Deer”). Curator Karine Duhamel and Design & Production Manager Rob Vincent will then lead a discussion about the new exhibition.

Earlier in the day, a Canadian citizenship ceremony takes place from 11 a.m. to 12 p.m. and the Winnipeg Youth Chorus performs in the Stuart Clark Garden of Contemplation from 1 p.m. to 1:30 p.m.

Next to the new exhibition on Level 6, a family activity will be offered from 11 a.m. to 4 p.m., provoking thought about the power of words, voice and oral history in affecting human rights. Participants will consider how their own history, culture, traditions and world views have shaped their perspectives.

Located in the Level 6 Expressions gallery, Rights of Passage takes a fresh look at events that influenced human rights at different times in Canadian history. It includes personal accounts of Indigenous Peoples’ efforts to resist assimilation, preserve a unique history and alter the path of the future. Examples of its diverse stories can be found on the CMHR web site.

The exhibition is divided into five zones:

1) 1867-1914 – Foundations and Dislocations. Designed with wood, newsprint, bill posters and lead type, this zone looks at issues facing the new nation of Canada and the First Nations who were already here: early workers’ struggles, colonization, social reform, fundamental freedoms and treaties with Indigenous people. A Victorian-era magic lantern projects images on the wall.

2) 1914-1960 – Transformations and Interventions. Designed using steel and industrial materials, this zone examines effects of the two world wars and the Great Depression. It explores stories of people taking action, use of state power to curtail civil liberties, the government’s policy of assimilation and the transformation of politics. A large, wooden radio plays replicas of broadcast speeches from the era.

3) 1960-1982 – Towards the Charter. Designed with plastic and 1970s orange-and-yellow details, this zone explores the turbulent years as Canadian society became more diverse. Its stories cover nationalism and pluralism, social security and the Charter of Rights and Freedoms. TV sets from the 1970s play relevant newscasts of the day.

4) 1982 to 2017 – Human Rights in Contemporary Canada. Designed with LED lights and fibre optics, this zone looks at Canada’s expanding role in the world, the effects of national security on civil liberties, reconciliation with Indigenous peoples and issues arising from digital communications, diverse gender identities and environmental challenges. A dress made of wearable technology responds to floor-projected hashtags.

5) Defending sovereignty. Designed with projection and graphics inspired by wampum beads, this zone looks at Indigenous rights through the lens of stories about forcible relocation, the burden of peace, effects of environmental degradation, inclusion of the Métis as Indigenous peoples, and the right to recognition. The interactive bead projection responds to visitor voices in recognition of the importance of the spoken word and oral traditions. Designs were created by art students at Children of the Earth High School in Winnipeg.

The Expressions gallery is generously supported by the Richardson Foundation & Family. 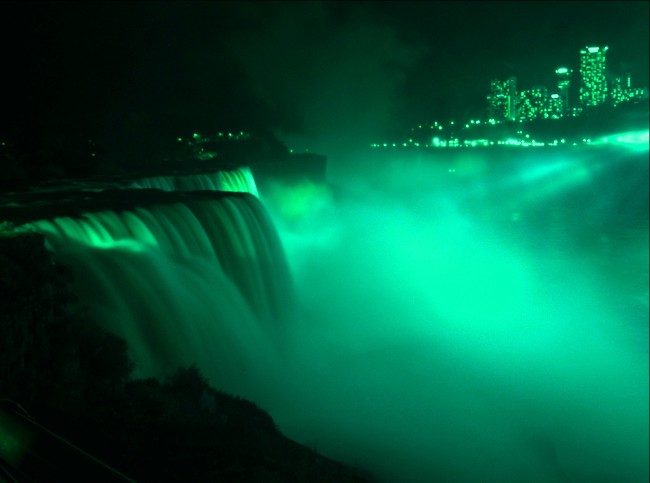 16 March 2017:  Over 250 iconic landmarks and sites around the world will be illuminated green over the coming days – as part of Tourism Ireland’s 2017 Global Greening initiative to celebrate the island of Ireland and St Patrick.

The annual initiative, now in its eighth year, which sees a host of major landmarks around the world turn green for St Patrick’s Day, has grown from strength to strength, with many new landmarks signing up to take part this year. 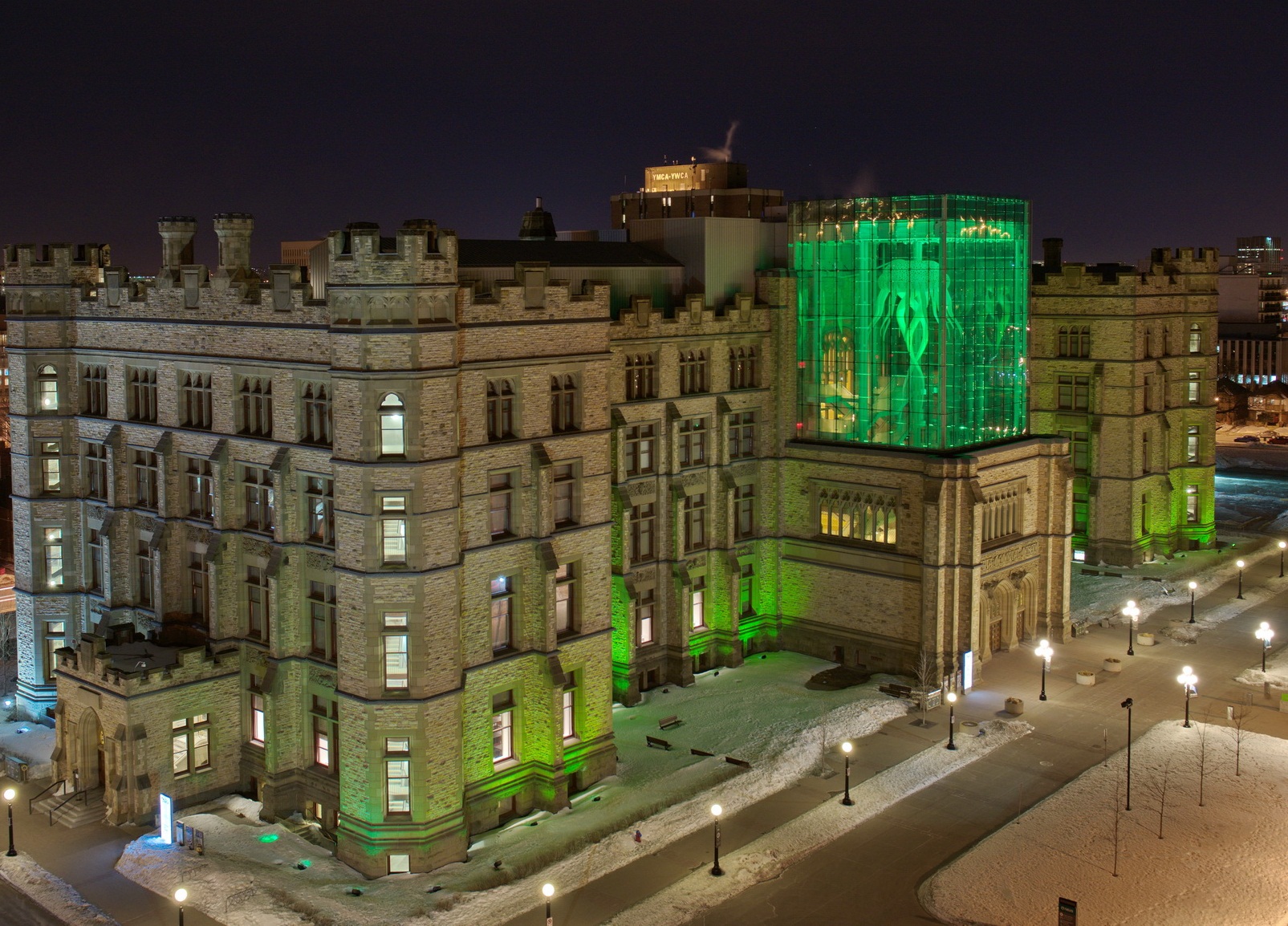 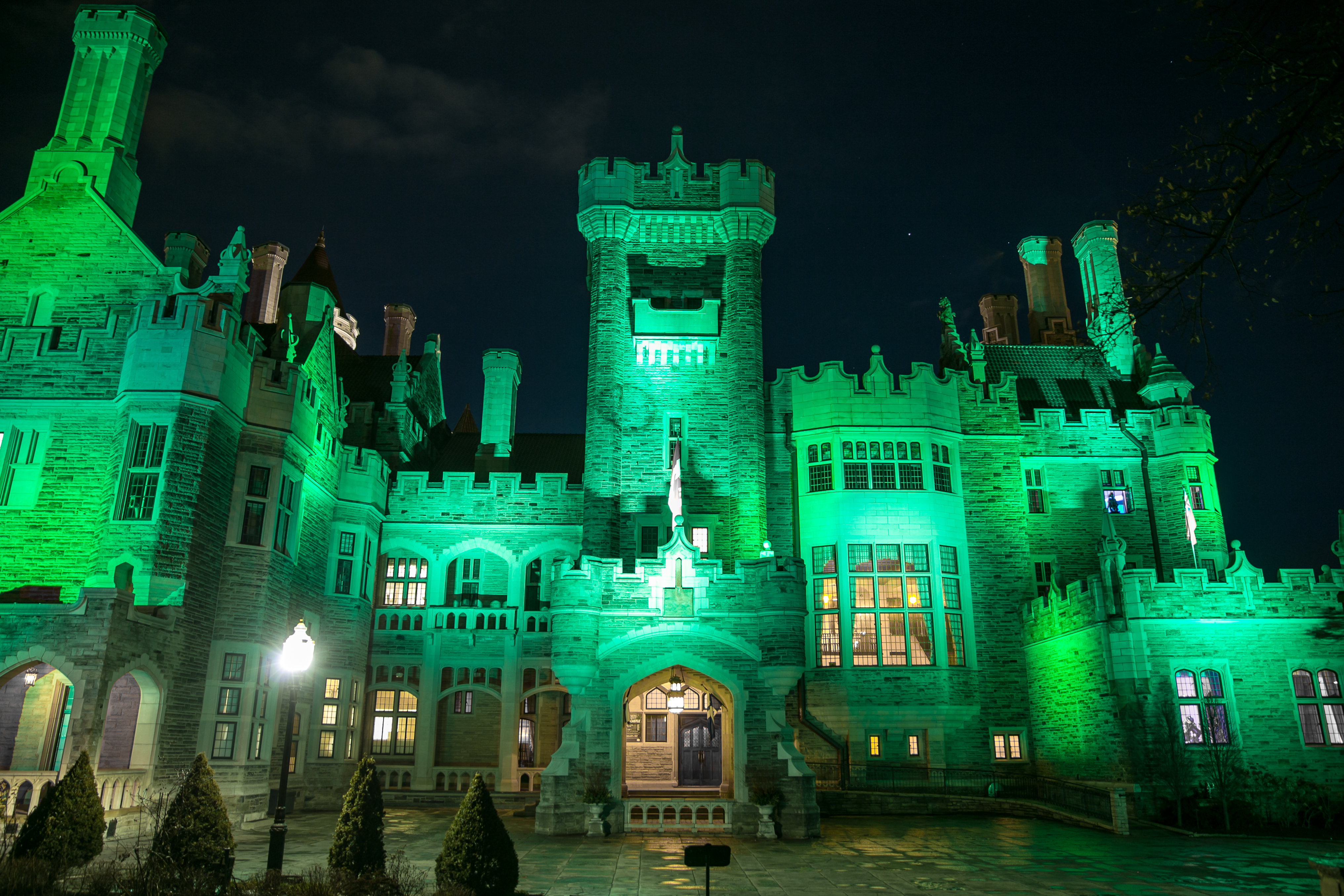 Niall Gibbons, CEO of Tourism Ireland, said: “This is the eighth year of Tourism Ireland’s Global Greening initiative and each year I am delighted to see even more well-known attractions and landmark sites wishing to get involved. The eagerness of cities and countries everywhere to take part underlines the strength of the deep connection that people all over the world feel to Ireland. More than 70 million people around the world claim links to the island of Ireland and St Patrick’s Day is a truly unique opportunity to reconnect them with their heritage.”

Of course, the ‘greenings’ are just one part of the St Patrick’s Day celebrations. The place to be on 17th March is Ireland where there are two festivals which shouldn’t be missed.

In Dublin, Ireland’s capital city, the ‘St Patrick’s Festival’ will last for four great days, taking in the weekend and running from 16-19 March.  The city will be alive with music, film, arts, dance, culture, fun and even international rugby. 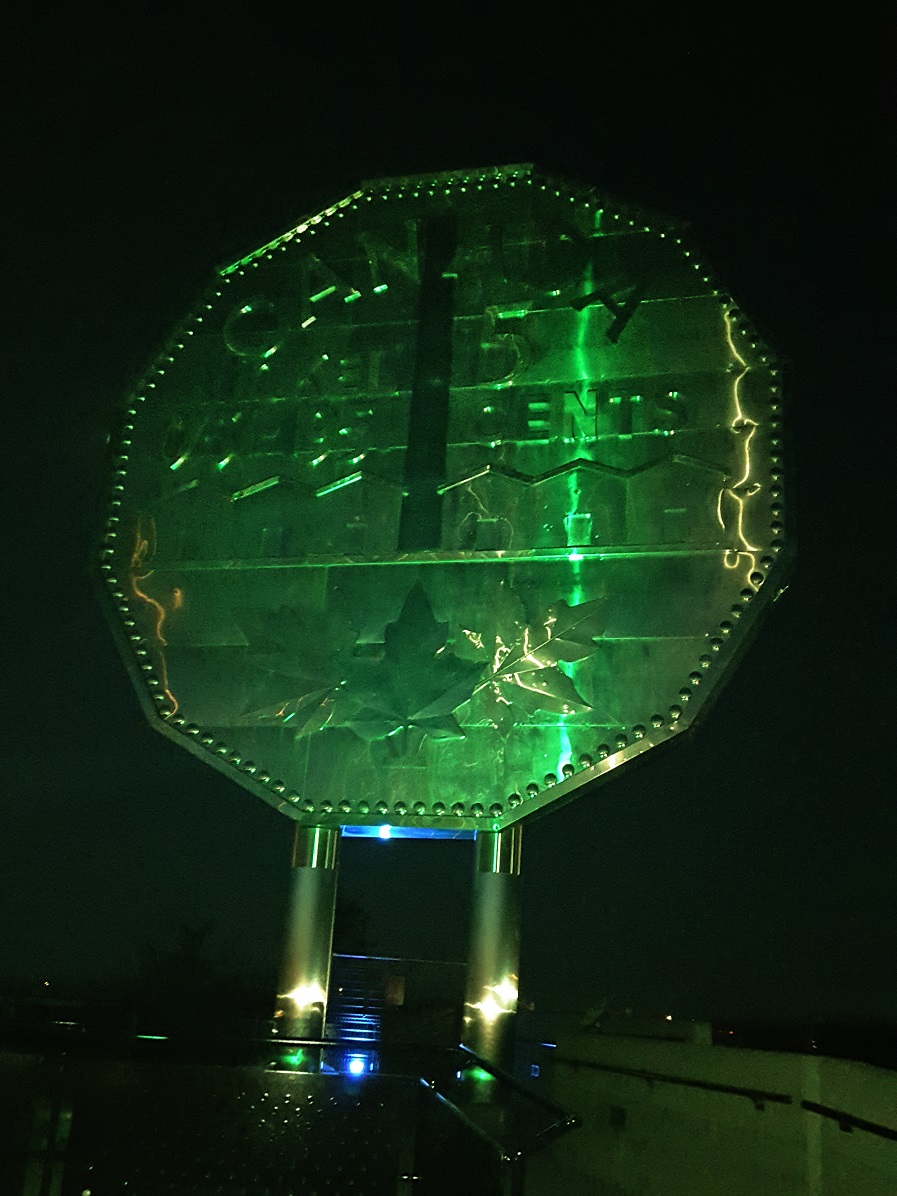 Each year the festival has a different theme with this year’s ‘Ireland We Are’ giving the city a chance to showcase all that Ireland stands for today.  Festival favourites include the world’s largest outdoor céilí, world-class museums hosting free workshops and guided historic walks including famous sites such as the Guinness Storehouse. The main event, the St Patrick’s Festival parade, is held on Friday 17 March in Dublin’s city centre.

In Northern Ireland, the newly curated ‘Home of St Patrick Festival’ celebrates St Patrick, the man and the saint, as one of the world’s most inspiring and loved saints of all time. Taking place in the beautiful landscape of Counties Armagh and Down, which was once Patrick’s home, the festival will culminate on Sunday 19 March with ‘The Voice of the Irish’ closing concert in spectacular Newry Cathedral.

New play-based exhibit for children on its way to CMHR
Magna Carta exhibition closes after welcoming over 11,000 visitors
Winnipeg – September 24, 2015 – The Canadian Museum for Human Rights (CMHR) is getting ready to welcome a new hands-on exhibit for children next month after bidding farewell to Magna Carta.
“XOXO: An Exhibit About Love and Forgiveness ”
will open to visitors inside the Museum’s new Level 1 Gallery on October 4 and run until January 3, 2016. Through play-based learning, the exhibit will help kids explore notions of human dignity, respect and equality – concepts that serve as foundations for later human rights learning.
Children will enter a lively, colourful exhibit about feelings. They will play and have fun, act silly, consider what makes them sad, mad and happy, and be encouraged to think about love and forgiveness. The travelling exhibition – appropriate for  even the youngest members of the family — was created by the Children’s Museum of Pittsburgh with support from the Fetzer Institute.

XOXO: An Exhibit About Love and Forgiveness will be the second exhibition in the Museum’s Level 1 Gallery, a 450-square-metre space completed in June 2015 with state-of-the-art technology and climate controls that enable the Museum to host exhibits of any size and type.
The first travelling exhibition in the gallery, “Magna Carta: Law, Liberty and Legacy“, closed last Friday (September 18) after a five-week run that welcomed 11,600 visitors to view one of the world’s most famous historic charters, alongside some of Canada’s
most important foundational documents. The exhibition celebrated the 800th anniversary of the great charter that laid the foundation for basic principles of democracy and human rights.
“We began in the past and now move to the future, with a wonderful exhibition aimed at the next generation of human rights defenders,” said CMHR president and CEO John Young. “Development of human rights concepts are for all ages, including the youth. We know they resonate from our school programs and summer day camps.  Our new exhibit will give families, daycares and children’s groups another reason to visit Canada’s new national museum. We hope it will prompt family conversations about how we treat and interact with each other.”
An online game connected to the Magna Carta exhibition, developed by the CMHR, will continue to  be available through the Museum’s website. The game, called “Making Meaning: Images and Perceptions” is intended to provoke thought and discussion about the way human
rights history can be reinforced or distorted.
Magna Carta and its companion document, the Charter of the Forest, were on loan from Durham Cathedral in the United Kingdom in an exhibition tour organized by Magna Carta Canada, developed by Lord Cultural Resources. The exhibition makes its next stop in Toronto’s Fort York National Historic Site, starting October 4. The CMHR had developed a unique companion exhibit for the Winnipeg leg of the tour, focused on Canada’s own constitutional documents – on loan from Library and Archives Canada– and their connection to rights and freedoms.
The Canadian Museum for Human Rights is the first museum in the world solely dedicated to the evolution, celebration and future of human rights. Using multimedia technology and other innovative approaches, the CMHR creates inspiring encounters with human
rights for all ages, in a visitor experience unlike any other.

Winnipeg – June 26, 2015 – Human rights come alive at Canada’s new national museum on July 1 with music and family-friendly programming throughout the day. The Canadian Museum for Human Rights (CMHR) will offer musical performances, participatory activities, a scavenger hunt, as well as tours and programs designed to spark thought and conversation about human rights. July 1 to 7 is also Canada History Week.

The Israel Asper Tower of Hope will also glow maple-leaf red on Wednesday night from dusk to dawn in honour of our country’s birthday. Three Canadian flags will fly from dawn July 1 to dawn July 2.

Combined with other activities at The Forks, high numbers of visitors are expected on Canada Day at the Museum – a great place for visuals and interview opportunities focused on our country’s achievements and challenges. The Museum is open from 10 a.m. to 9 p.m. on July 1, which also makes it the perfect spot to visit before the fireworks begin!

WHAT: Canada Day performances and programs at the CMHR

PLUS: Glowing RED Tower of Hope – July 1 starting at dusk

Entry into the Museum is subject to regular admission fees ($15 for adults).

•
Participatory activity for families, Rights on the Move – Level 5 Terrace

•
Interpretation from the Israel Asper Tower of Hope, 1 p.m. to 9 p.m.